Domingo Ibarra,
I understand you welcomed a post of your city, well here you go. I hope you like it, I’d hate to disappoint.
PS: You need a ‘Texas STOP sign’ in your city.
– Anthony Jr 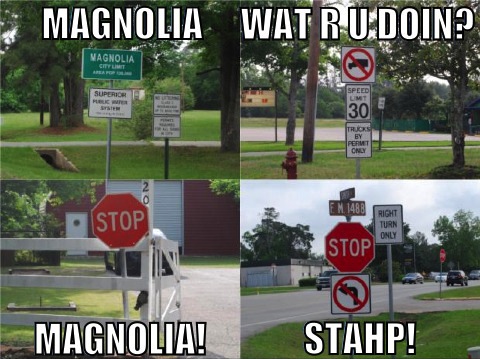 Photos below the break;

END_OF_DOCUMENT_TOKEN_TO_BE_REPLACED

Since the early 2000’s, I have observed & documented persons under the age of 18 both directly and indirectly controlling motor vehicle traffic on City R.O.W., holding/carrying devices with “STOP” and displaying these devices to motor vehicle operators while standing in the direct path of motor vehicles. Back in mid-2000’s, I was told by a former female patrol officer & later former chief, “The PD directly was responsible for the “STOP” devices to be in the procession of the students that are standing in the direct paths of the motor vehicles.”

END_OF_DOCUMENT_TOKEN_TO_BE_REPLACED

Safety is a major consideration in RADAR/LIDAR site selection.
RADAR/LIDAR’s whole purpose is to improve traffic safety, so it is clearly undesirable to conduct RADAR/LIDAR operations where the vehicle’s presence will worsen the safety situation.

The bus was parked in front of Palmer Laakso Elementary, near San Benito, Texas on FM 1847 in the 12in diagonal striped zone. As a part of KGBT-4’s “Streets of Speed” segment.

Full story below the break;